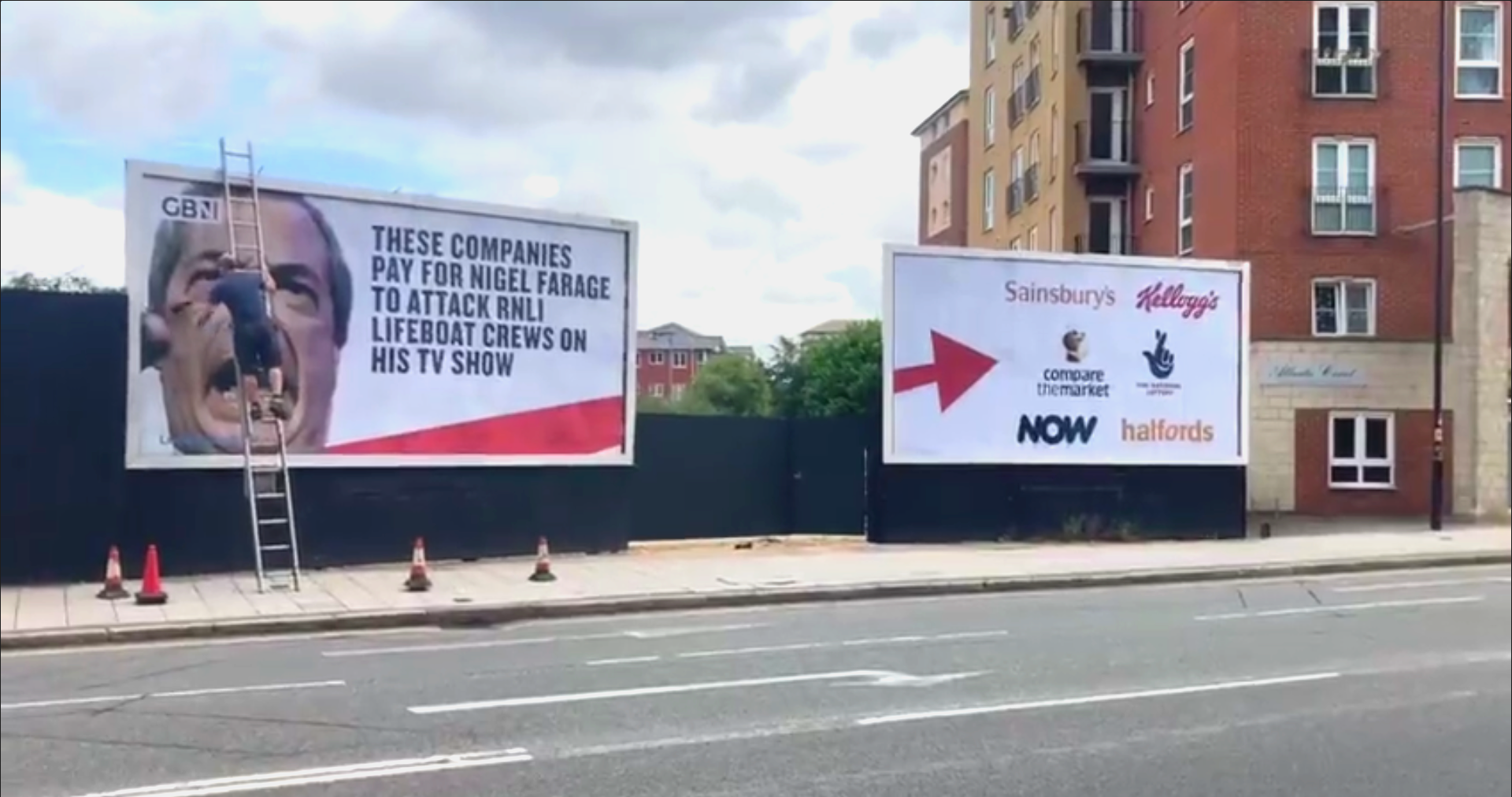 Campaign group Led By Donkeys, known for their politically aware and imaginative 42-sheets, have struck again. Their most recent OOH campaign applied pressure on brands’ commitment to conscious advertising by highlighting household names running ads on self declared “anti-woke” channel GB News. The channel’s appointment of former UKIP leader Nigel Farage as host, who promptly used his platform to criticise the Royal National Lifeboat Institute, has come in for much criticism.

The campaign drew attention to Sainsbury’s, Sky’s Now TV, Kellogg, The National Lottery, Comparethemarket, and Halfords, accusing them of “paying” for Farage to attack the RNLI on his recent slot on GB News TV.

Last week, Farage let loose on the RNLI, referring to them as a ‘taxi service’ for migrants attempting to cross the English Channel. Later mocked by The Independent, who pointed out the British institution’s strap-line, ‘Saving lives at sea’, Farage also came under strong opposition by resting GB News boss Andrew Neil. He proclaimed the RNLI as ‘the epitome of courage and self-sacrifice’ and ‘the very best of British’.

The UK lifeboat charity received upwards of £200,000, a rise in 3000% in donations over the same period. Showing that along with Neil, many opposed Farage’s comments and supported the cause to aid overcrowded boats heading to Britain.

As donations to the Royal National Lifeboat Institution picked up pace following Farage’s comments, Led By Donkeys also chimed in on the action, using a dual billboard placement to display Farage’s controversial outburst and call out the brands still purchasing ad space on the network, subsequently funding the former UKIP leader’s salary.

The poster copy reads: “These companies pay for Nigel Farage to attack RNLI lifeboat crews on his TV show” – with a red arrow directing passers-by to an adjacent billboard, that depicts the logos of each of the brands.

A statement put out by Led By Donkeys said: “This is the first time that we have said anything about GB News. Andrew Neil asked people not to jump to conclusions, to wait and see how the channel evolves. Now we have seen how it’s evolved. It’s employing Nigel Farage to attack RNLI lifeboat crews, saving lives on the channel. We’re not sure why Sainsbury’s wants their brand associated with Nigel Farage.”

Suggesting that Sainsbury’s or any of the other brands mentioned are in support of Farage, or in any way endorsing his characteristic and by now formulaic outbursts is perhaps far-fetched. Nonetheless, it does raise important questions around brand association and Conscious Advertising. Do these brands know where their ads are appearing? And if not, why not?

It’s not rocket science, but apparently major brands are still using agencies who won’t give them full oversight of where their ad spend is going, or ensure minimal brand safety protocols.

GB News started out with a large, mainstream advertiser base. Its launch day even outperformed the two main news channels, BBC News and Sky News. That has shrunk significantly since an organised boycott in late June. Sky Media’s reversal of spend on GB News is largely responsible, after it placed partner ads on the channel without informing them. The Drum referred to this mishap as brands being  ‘victims of automated, audience-based buying in the TV age’.

Coupled with dwindling audience numbers and periodical social media pressure, it might not be too long before the channel fails to supply enough visitors to be worth any noteworthy ad spend.

It’s also easy to admire, from a purely technical point of view, Led By Donkeys’ media strategy – provocative outdoor hero content, supported by PR and social amplification, courtesy of their engaged and vocal supporter base.

But these opposing sides of the UK’s so-called ‘culture war’ are creating a divided and divisive media territory for all other brands to operate in. These choppy waters are making brand safety, conscious advertising and authentic storytelling more important than ever.

To join the discussion about brand association and conscious advertising – get in touch!

Drink Water: Why the real Euro 2020 battle is brand vs brand influencers