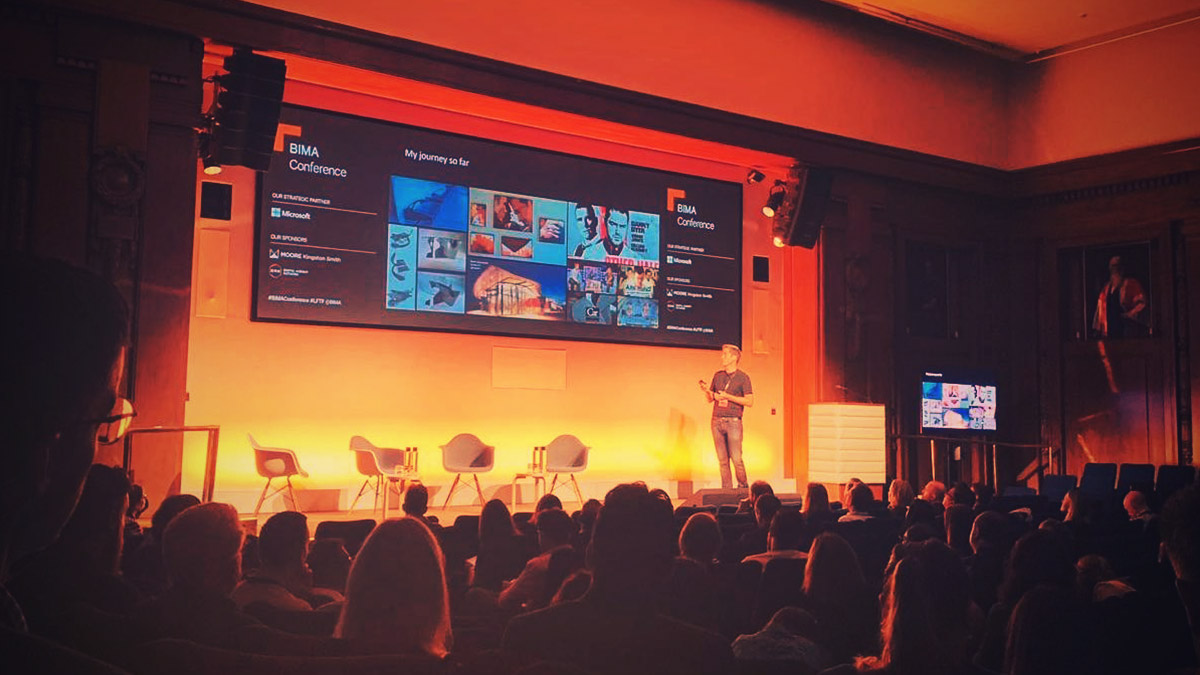 Held at the historic IET Savoy in London, the grand lecture theatre was brimming with industry experts and professionals, eager to hear all about how people and technology are solving our biggest business challenges.With such an exciting agenda, we were spoilt for choice when it came to discussing the interesting takeaways from the event. With that in mind, we have chosen to talk about our top 2 talks from the day and how we believe their content can play an important role in the future of business, our planet and technological development.

Up In The Air: The New Commute

Anita Sengupta, a rocket scientist and aerospace engineer who has worked at NASA and has over 20 years in the space industry, gave an inspirational talk about her latest venture – working with Airspace Experience Technologies (ASX) and how new modes of transportation, such as hyperloop, urban air taxis, supersonic flight and more, impact the landscape of business aviation.

With the climate crisis a huge topic and one not to be ignored, along with overpopulation and traffic an everyday annoyance for most of us, Anita’s talk was a refreshing and welcomed insight into the world of airspace travel and what is being done to tackle these issues.

Traffic is taking over our lives, and an astonishing 1.9 billion gallons of fuel is wasted per year due to traffic. What’s more, we spend on average 97 hours of our lives a year sat in traffic… just think about those stats for a moment.

The company’s mission? To create an eco-friendly, quiet and connected “electric vertical takeoff and landing” (eVTOL) aircraft that leverages the perfect fusion of proven automotive grade innovation and aviation technology.

Forming a connected highway in the sky, Airspace Experience Technologies (ASX) hopes to tackle these challenges head-on and help to drive sustainable change and growth in Detroit, where the aircraft will be designed, developed and built.

By creating a revolutionary mode of transportation, more efficient than a helicopter and fully electric, it’s clear that Anita and her team are hopeful that we’re well on the way to driving transformational success and helping to work towards a cleaner, more efficient way of travelling.

Disruption for Good: How Innovation has Helped Transform the Fight Against the World’s Oldest Enemy

In this panel talk, hosted by Rob Campbell, Executive Strategy Director at R/GA EMEA, we heard from the likes of Kate Wills from Malaria No More UK, Victor Riparbelli, CEO from Synthesia and Nick Moss, Creative Director at R/GA London about their award-winning campaign, ‘Malaria Must Die, So Millions Can Live’.

People have been fighting to end Malaria, one of the oldest diseases in history, for years. So, when the World Health Organisation’s annual World Malaria Report showed that the years of progress that had been made was under threat, Malaria No More knew something drastic had to be done to raise awareness of this deadly disease.

So, in February 2017 David Beckham launched the Malaria Must Die, So Millions Can Live campaign, and by April, it had reached one billion people and had paved the way for the Malaria Summit alongside the Commonwealth Heads of Government Meeting.

In this talk, we heard how technology played a crucial role in the campaign and the scalability to be the first voice petition ever created. With the help of Synthesia, an AI video production company, the campaign featured a 55-second spot using video synthesis technology to make David Beckham appear multilingual. His speech begins in English, then transitions into eight other languages with convincing dubbing.

“It’s our responsibility as professionals working in the creative industry to make people sit up and listen, which is why we harnessed the power of voice as the medium in this work.” – Matt Lodder, Executive Vice-President & Managing Director at R/GA EMEA

The results to date? Last year, leaders pledged $4.1 billion to fight malaria and 53 heads of government have now committed to halving malaria in the Commonwealth in five years. This is a huge success that landed the campaign a well deserved Grand Prix award at the 2019 BIMA Awards.

However, through all the good this campaign is doing, there is a somewhat darker and more controversial side to this use of technology. I’m sure everyone remembers Donald Trump’s video of him offering advice to the people of Belgium on the issue of climate change. And if you haven’t yet seen it, it’s worth looking up.

Turns out, this video was actually created by a Belgian political party, Socialistische Partij Anders, otherwise known as sp.a. This was a deep fake video which, to the naked eye, appeared completely realistic.

In the wrong hands? There is room for people to abuse the use of tech and its incredible scalability to utilise this tech for deep fake information and spreading disinformation across the globe. That being said, whilst this clever and transformative piece of tech is being used for good, like the Malaria No More campaign – we’re huge supporters, and we’re excited to see how this technology can scale even further for the use of good.

In summary, it’s clear technology is carving the way within the industry and, used correctly, is helping to lead the way in forming change. At a time where a lot of the world is in despair about the bleak projection of our planet, it’s important to focus on the great things people are doing within our industry to harness technology to drive change.

It’s important, as marketers, that we continue to educate ourselves about the industry and utilise ideas and innovation from the wider marketing world to help aid our campaigns and strategic planning. Harnessing and keeping abreast of these developments across industries ensures we’re continuously learning and growing as marketeers. And, what’s more, we’re competing with the ‘big dogs’ in this world, so it’s vital we stay up to date in order to cut through the competitive noise.

Read more about how aip are utilising tech in order to do good in our latest blog post here.

Anything is Possible wins Start-Up of The Year

With the dust still settling, what’s going on with Clearing 2020?